The thing that keeps me keen to keep writing about my herbal experiences is trying something with mystique. I love coming across something I’ve been interested in for years but never had the access. Turns out the Burmese cannabis strain was the secret sauce in Sunset Sherbet and it’s winning traits are worth your attention.

The flavor of Burmese (in this case 3 phenotypes) is instantly recognizable as the creamy lemon element of Sherbet. Burmese pheno 2 and 3 (see corresponding photos) and two were so similar that I’m not able to differentiate. The dominant flavors are citrus, cream, and sharp fuel. The last one was unique in both nose and flavor. Number 1 had a kind of smell that is best described as incense and a flavor that had a slight anise tinge on the exhale. Burmese 1 also has a much darker purple color.

All of the samples have psychedelic color enhancing tendencies and are mildly stimulating. I didn’t experience any of the negative aspects associated with narrow leaf cultivars, and it’s fairly clear headed. Burmese 3 was slightly more sedate compared to the first two and it was my favorite for that reason.

It’s interesting to see how Burmese influenced it’s famous progeny, and it’s a pleasure to get to finally get to try it thanks to @uncle_jesses_collective.

Jumpstart your journey into the sommelier lifestyle. Subscribe to RicksPicks right here. It's always awesome and always free.

You have Successfully Subscribed! 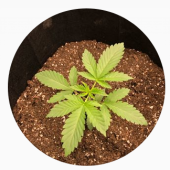 I review other peoples’ cannabis, and I grow my own. I don’t sell it, so don’t ask. I believe in being genuine and give honest feedback.

How to Use Cannabis Infused Coconut Oil

What is Light Deprivation